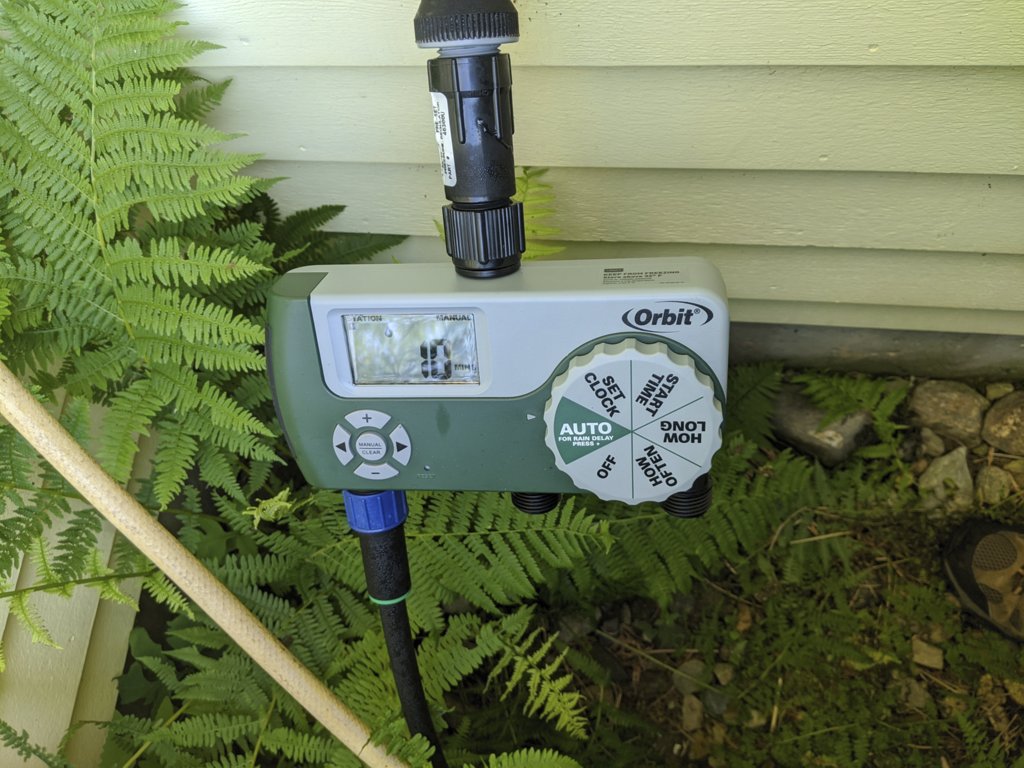 Members may remember visiting Garry and Lela’s gardens and Garry showing us his drop irrigation system in August of 2018.

Based on Garry’s success and the knowledge he shared, I decided to try installing a system for our gardens. I started with “Fort Knox”, our most seriously fenced garden.

Step 1: I ran a line from a faucet on the back of the house to the garden. I had to cross the lawn so I buried the 1/2″ poly line in a narrow trench that should re-grow grass on its own. If it doesn’t, I’ll seed it in the fall. 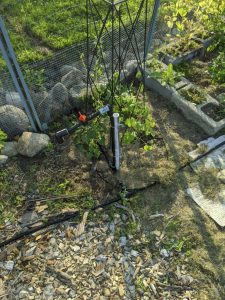 Step 2: I ran the distribution line into the garden and added a faucet since not everything in the garden will get a drip emitter. A local water source in the garden is much better than carrying buckets or bringing the hose out then putting it away to mow the lawn. 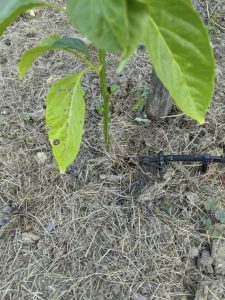 Step 3: I ran the drip lines from the distribution line to the plants with an “emitter” on the end(s). The emitter is a pressure compensating, flow regulating device. The model we used drips 1 gallon per hour. In many cases I attached two emitters on the ends of a semi-circle formed from a tee and two lengths of 1/4″ poly to reach two plants with one puncture in the 1/2″ distribution line. 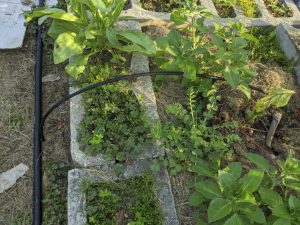 Step 4: In a few cases I laid out two emitters on one line so that there was a close and far dripper by using the tee halfway down the 1/4″ line to reach into a short row and water it in two spots.

Step 5: After a quick test with just the hose and a pressure regulator / filter screen in the line, I added the timer. We went with a 3 valve Orbit timer. These timers are very intuitive to setup and use and the three lines will eventually allow us to use drip irrigation in our three main vegetable gardens. We’ll water one at a time by staggering the schedules so that there is enough pressure for each garden. There are over 100 emitters in “Fort Knox” which is about the limit for a 1/2″ distribution line!

We used the remaining 1/2″ line to add a faucet out in our front garden for now. More tubing is arriving next week so I can install the drip system out there too and attach it to the timer.

We happened to use a mix of Raindrip and DIG parts but most of these systems use interchangeable parts. The main components of our system are: